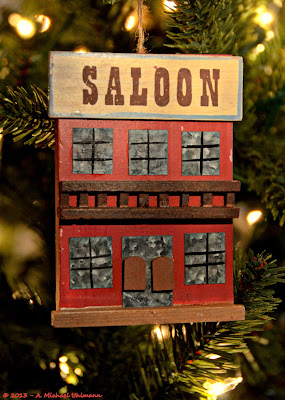 Not always is Christmas happy and merry.

Conflicts with the law, broken relationships, loneliness or simply dysfunctional families can put a burden on these holy Holidays.
Good part about it is, that they also inspire songwriters to tell about it. It's basically a reality show wrapped in the soothing sounds of Christmas music. So in this third part of a "Honky Tonk Christmas" let's put the fun back into dysfunctional (my Saloon ornament is hanging) and listen to some tunes, that aren't your standards accompanying "Silent Night," "Oh Tannenbaum" or more secular ditties like "Rudolph The Red Nosed Reindeer," "Frosty The Snowman," "White Christmas," "Let It Snow, Let It Snow, Let It Snow." "Santa Claus Is Coming To Town" or even "Feliz Navidad."

First in my list of a half dozen not so PC-friendly, dysfunctional songs is an over 25-year old classic done by Irish punkers The Pogues together with Kirsty MacColl (who passed away in 2000) called "Fairytale Of New York." Even though the song only reached #2 in the British Charts during it's initial release in 1987, it's this season (2013) most downloaded Christmas song in the UK.  Though the protagonist of the song is in the drunk tank on Christmas Eve to sober up, he sees quite a rosy future with his loved one.

And what you may have realized is that my definition of Honky Tonk music is quite wide and yes it includes Tom Waits. According to Wikipedia - even though the quote can't be traced anymore - he was quoted about "Christmas Card From A Hooker In Minnepolis" as follows:

"I was in Minneapolis - it was 200 degrees below zero - I know - you think I'm bullshitting, no, I swear to God, I was wearing just a bra and a slip and a kind of dead squirrel around my neck - he was colder than I was. The police cars would go by and they'd wave... Merry Xmas, Merry Xmas, Merry Xmas - anyway - I got caught in the middle of a pimp war between 2 kids in Chinchilla coats, they couldn't have been more than 13 years old - they're throwing knives and forks and spoons out into the street - it was deep - so I grabbed a ladle - and Dinah Washington was singing "Our Day Will Come" and I knew that was it."

I can't say it much better, besides mentioning, that we are all looking for Valentine's day coming up.

I knew that John Prine had a song called "Christmas In Prison" of his 1994 Holiday album "A JOHN PRINE CHRISTMAS" but after re-listening to the whole album, I decided to use the only (at least that I know of) song that cynically compares a broken up relationship with a decaying Christmas tree and how bittersweet it is to wish the former lover "All The Best." Definitely a Christmas song, no department store would use as elevator music.

Alcohol also can be (is) a specific Christmas problem and leads to a crossroad of possibilities:
- a) drinking out of joy and celebrating (for some reason the most kids in the US are born roughly nine months after the Holidays - http://www.labnol.org/internet/most-popular-birthday-months/21283/ - longer, darker nights may be playing a role too)
- b) others may indulge due to dysfunctional relationships, insane family ties and trying to cope with that in a buzzed or even drunk state of mind
- c) and finally all the people who are alone and don't have anybody to celebrate the festivities with

In 1973, John Denver released "Please Daddy Don't Get Drunk This Christmas," a song written by husband and then-wife team, Bill Danoff and Mary "Taffy" Nivert. The couple was quite successful and had other hits with "Take Me Home, Country Roads - by Denver," "Boulder To Birmingham - by Emmylou Harris" and their self-recorded, as the Starland Vocal Band, #1 hit "Afternoon Delight."
Twenty years later, Alan Jackson spiffed that little ditty a bit up, made it with a shuffle beat a lot more giddy and the steel guitar replacing the dobro made it more jukebox friendly.

How can I pass up lyrics like "I need some Christmas spirit, and by spirit I mean booze; I'm getting drunk, drunk, drunk on Christmas." This song was written by Late Night TV host Jimmy Fallon and a writer of the show, Gerard Bradford and premiered three years ago, with special guest John Rich (Big & Rich) sitting in with Fallon and back-up band, The Roots. As the original clip isn't around anymore, I had to replace it with the Big & Rich version.

Lecil Travis Martin aka Boxcar Willie, even though only remotely popular in the United States was a superstar overseas and is believed to have sold more than 100 million albums. His carnal wish was infused by the beautiful Southern ladies in the TV show "Hee Haw" and Hugh Hefner's playboy bunnies - and yes that simply is all he wanted under his Christmas tree.

One of my all-time favorite
dysfunctional Christmas songs is "Merry Christmas From The  Family" penned by Texan Robert Earl Keen. With a sharp wit, he describes the Christmas needs and family relationships as it would be part of a reality show. The parents are getting drunk, the sister shows up with a new Mexican boyfriend, who woos everybody with "Feliz Navidad," brother Ken who arrives with wife #3 brings his five kids out of two earlier relationships. And it's Turkey, football and more booze - trips to the convenient store to restock with cigarettes, diapers, tampons and whatever you need in the 24/7 world that America is.