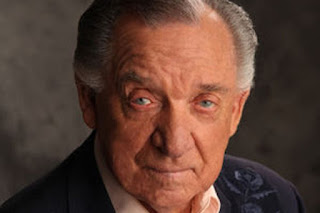 We all knew it would happen. The pancreatic cancer was back and Ray refused to go through another strain of chemo and decided to die peacefully in hospice care in his Texas house in Mount Pleasant. A rushed statement by his son made him die premature, but this afternoon at 4:43pm Ray did pass away. I'm sure there will be many (better and extensive) obituaries covering his six decades in the music scene.

I thought I will just remember him with some anecdotes, trivia and personal experiences.

Ray Price single handedly changed country music a decade before Willie and Waylon started their outlaw waves in the music business. After being a disciple (actually roommate) of Hank Williams, his early albums were pure Hank-influenced, songs right on the edge between sin and salvation. With the emergence of Rock'n'Roll, Ray changed the old solemn sounds with his signature hard driving, jazz-influenced 4/4 shuffle into a highly dance-able Honky Tonk sound which up to this day still exists in every "true" Texas jukebox and dusty dancefloor.
Just listen to "Home In San Antone" from his album "SAN ANTONIO ROSE" - you may have to do that several times to get actually get the different layers - first just listen to the tight rhythm work of drums and bass, add the "classic" fiddlin' by Tommy Jackson, then indulge in the mastery of Jimmy Day on the steel guitar and then give a listen to Ray's vocal acrobatics. Piece the pieces together and the sum is way bigger than it's parts. And please be warned this stuff is addictive.

Yes I'm bluntly honest - some of his next invention, the cosmopolitan Nashville sound turned me off, all the strings were layered so thick and smooth, that at the time it was barely listenable to. I did change my mind in retrospect. And the BS (yes that stands also for a musician) crap that Nashville is now releasing, elevates these tunes like gems in a field of burnt coal pieces.

When he was introduced into the Country Music Hall of Fame in 1996 I was there at the Grand Ole Opry working the event for several European radio stations and will never forget his quip "Well It's About Time." And right he was, having changed the sound of country music twice. In substance he was the Tony Bennett of Country Music, where George Jones was Frank Sinatra. In 2000 Ray made a trip to SXSW (music fair) to perform a free concert at Waterloo Park. Despite a cold front who dropped the balmy afternoon temperatures 30 degrees into the 40s, there were more than a thousand attending and enjoying that show (which also featured the Derailers and Hank Williams III). Still remember dancing on the lawn of the park - mostly to stay warm - when someone poked me in the back - they were some old friends of mine, members of BR5-49 who also attended the music fair and came out that night to check out and pay tribute to the Cherokee Cowboy.


The medley below of two of his hit singles, even though recorded during a different concert, pretty much explain the experience that beautiful, even so very frosty night.

By 2007 I was struggling, living out of my car - but Ray announced two concerts in Austin, together with Willie Nelson, Merle Haggard and Asleep At The Wheel as part of the "Last Of The Breed"-Tour. Sure glad I was able to work "parking" these two magical nights and seeing that show twice. After the show we all rushed to Poodie's (Willie's former road manager's place - RIP) to see who would show up for the after party, some of the Cherokee Cowboys did, but it never became that much wished for Jam-Session for all the musicians involved. Nevertheless Ray stole the show these two nights. A year later he returned with "TIME" actually touching some of the old shuffle themes who made him so famous. "You Just Don't Love Me Anymore" became an instant favorite.